This is a hilarious little episode that highlights perfectly why I hate fundamental people, regardless of their religion.
I’ve mentioned Heidi Carico before. She is the venomous little troll who is all over the internet, spewing her poisonous anti-evolution, anti-atheist, anti-reality brain dribblings. She is a member of the Facebook page “The Death of Evolution”, a silly little page promoting a book of the same name. This page has recently died a death itself, which is a nice twist of irony.
One particular thread had been out of use for nearly two months until the other day when Heidi Carico launched a salvo at yours truly. Why I came in for this I have no idea as, looking back over the contents of that thread, I had not said anything untoward to her. More evidence the woman is stark raving mental? 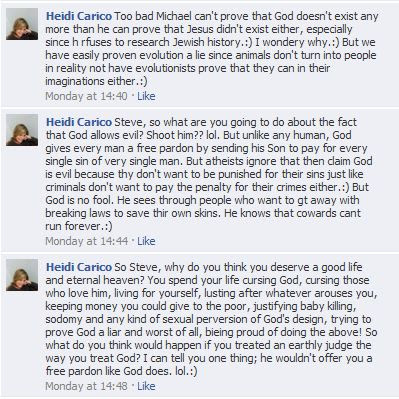 If you ever encounter this deluded for the Messiah be aware you are not dealing with a person for whom reality is a close friend. Laugh at her posts and consider them for what they are, the signs of a deeply troubled and deeply damaged psyche. I would urge you to feel pity for Heidi, it cannot be easy being that fucked up.
Posted by Opinionated Primate at 04:45