Victimising the Victim for Christ

If evidence be needed of how Christians, especially fundamentalist Christians, view atheists with absolute contempt, it is this. Please note, the following update contains very strong language and a disturbing image.
It has been documented elsewhere on this blog of how Nyles Seru, an admin on Facebook's Atheism, Humanism and Satanism vs Biblical Christianity had harassed me, repeatedly posting on my personal wall until I was forced to change my privacy settings. Nyles has been up to his old tricks again.
Nyles decided to post the following link, which contains graphic images of abortions.

A member on that page, Catherine Stevens, protested that it was not appropriate to post this material, any discussion about abortions did not require such images. Nyles, being the arrogant little vermin he is, decided not to reply on the page, where everybody could see, but to PM Catherine, without permission. He said.
Its funny how you found the abortion pix offensive. That is the grim reality. You cannot sweep this issue under the carpet, sip your coffee and pretend that abortion is not real...let the whole world see the truth of it. The mother will live with the pain, guilt and shame. Why did you abort one too?..Did the pix touched a soft spot?
This in itself was unacceptable, so Catherine replied.
No, I've never had an abortion but nor would I impose my beliefs on somebody else. Now, get the FUCK out of my PM you vile little wanker.
You might consider her profanity wrong, but she is well aware of how Nyles has behaved in the past and has very little time for such a pernicious cyber bully.
Did Nyles comply and leave her alone? No, of course he did not. He came back with.
Oops! why you so full of anger and bitterness. Anger resides in the lap of fools. Take your cool!..
Catherine, angry he was ignoring the request to be left alone, returned with.
Anger resides in those who have vile little cunts like you PM them. You've been warned of doing this by others. Go away.
Again, you may object to the bad language but this was harassment and attempted bullying of a woman, pure and simple. That is something that should never be condoned. Nyles, still ignoring the request to leave her alone, came back again with.
Seriously why do you want that post out of FB?..You are the kind that ask for evidence, now get it and now you're offended!..
Catherine, getting understandably exasperated at this point replied.
Not offended, I just see no need to post that when a discussion would suffice. Now, go away and DO NOT pm me again. If you contact me this way again I will consider it harassment.
Note how Catherine made it clear that further contact would be considered harassment? That should have been good enough, anybody with an ounce of respect for another person would have complied. Not Nyles, he came back.
I think I might as well DELETE you from our page afterall!..intolerant
Maybe that will make me go away...or you rather
But we wouldn't wanna do that....
So he resorts to threats of removal from the page? This is quite clearly bullying and harassment, from an absolute coward. Catherine, not being the shy type, replied.
No, you really don't wanna do that.
NOW STOP CONTACTING ME. I HAVE REQUESTED YOU STOP, THIS WILL NOW BE CONSIDERED HARASSMENT.

Again, Catherine had made it clear that further contact would be considered harassment. Yet again, Nyles took no notice. His final reply being.


I will for now..but this wont be the last. I will hang around!..keeping an EYE on you!
Again, this smacks of harassment and intimidation from Nyles Seru.
Catherine, during this interchange had posted of it on the Atheism, Humanism and Satanism vs Biblical Christianity page. In those posts she made reference to her replies, including calling him the c word. Catherine Stevens, victim of harassment by an admin, was banned from that page.

Appealing to another admin, who I will refrain from naming as they are far more competent in their job, Catherine was re-admitted and apologized, promising not to use such profanity again. Was this good enough? No. They once again banned her, yet she had posted nothing further to cause offence.
What do we learn from this situation? That this particular Facebook page is run in such a despicable and incompetent manner that members can be harassed by an admin and when they complain they are the ones punished. This says an awful lot for the way in which Christians such as run that page view atheists, they see them as dirt and treat them as such.
As I documented previously, when Nyles attempted to harass me and I confronted him on their page, the page's creator, Kim Balogh did not reprimand him, she warned me and changed the page's rules to state “NOT RESPONSIBLE FOR CONFLICT OUTSIDE THIS GROUP”. But what of when that conflict arises from the actions of her admin and is connected to posts on that page? Kim obviously just wants to abdicate herself from the responsibility of keeping her admin team in line.
Kim Balogh is a disgrace, she is no more competent to run that page than she is to run a bath. No page creator should condone an admin under their charge when they attempt to harass and bully others. As far as I am concerned, Kim Balogh is complicit in the harassment as she has long been aware of Nyles Seru's despicable actions.
Nyles Seru, who also gloated of Christopher Hitchen's terminal illness and of how he will turn to god before the end, they all do, is nothing but scum. He attempts to cyber bully and harass others and then hides behind threats of banning if you dare respond. He is a particularly nasty little fundamental but, sadly, not unique. It is those like him driving me from atheist to anti-theist.
If you are as appalled and disgusted by this situation as I am, and you wish to view this cesspit of a Facebook page, you can find it here: http://www.facebook.com/home.php?sk=group_117282898325129
This is a screenshot of the PM exchange. 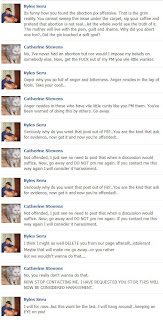 Posted by Opinionated Primate at 23:56