Bullies for Jesus. Harassers for God!

I was going to write about something altogether different but, after the events of last night, I find myself once again rummaging in the retardation of the fundamental of faith.
There is a Facebook page by the rather charmless and imbecilic title of "Atheism, Satanism, and Humanism vs. Biblical Christianity". Doubtless this title was chosen to imply that Christianity is under threat from the others. It's not but, having said that, we are due payback for the Crusades, persecution of witches, murder of abortion clinic staff...

Anyway, I digress. The creator of this cesspit of stupidity is one Kim Balogh, a woman so devoid of worth her posts rarely amount to more than quoting scripture, often entirely out of context and of no relevance to the subject at hand. She has also repeatedly claimed atheism is a religion, ignoring constant explanation that she cannot redefine words to suit herself, however much she might wish to think so. She is a particularly dumb creationist, one of many of such we encounter.
Recently the page has been joined by Heidi Carico. Now, those who are familiar with evolution vs creationism debates may well have heard of this loathsome little specimen. She is often to be found ridiculing evolution, attempting to debunk it using the most ridiculous straw man arguments and demanding we prove evolution by naming all of the characters involved and where they lived, right back to when we began. She doesn't want a list of genus types, Homo habilis, Homo ergaster and so on. She wants their actual names. Quite how she imagines we would do that I do not know, it's like saying your dog “Fido” didn’t evolve because you can't name his specific distant ancestor as “Godfrey” the grey wolf who lived under the big oak in Epping Forest, Essex, England. The woman also posits that if you aren't against homosexuality and have sons that are gay you should go out and help them have sex with men, otherwise you're homophobic too. She is like a one woman version of the Westboro Baptist Church. The vulgarity and bigotry she posts, both on Facebook and elsewhere online, has earned her a special place in the hearts of sanity mongers. She even has a “Heidi Carico Quotes 2” Facebook page; a repository of her various bile spewings. If you're ever bored and want a good laugh, check out this woman's attempts to debunk evolution, they range from surreal to downright hysterical. Her other views are generally just hate speech. I may have to turn my attention and this blog to her again in the future, she is a goldmine of guffaws.
Now we come to Nyles Seru, Kim Balogh’s right hand manchild. It says a lot of this individual that his Facebook page is private apart from his religious views, stated as “Fanatic”. 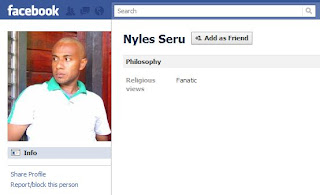 This would be an understatement.
Nyles is a bully and a coward for Jesus. I cannot put it more succinctly. He never enters into debates, even stating he has no desire to do so as his belief in God and the Bible is complete and he has no need to even read our posts. Quite how he can therefore function as an admin is a puzzle, surely they are there to ensure the page runs smoothly? He repeatedly makes glaring errors, such as misusing words and then refusing to define them. I shall give you an example;
Nyles: You heathens would never understand.
Us: We’re not heathens though. Do you know what a heathen is?
Nyles: Yes, I do. Do you?
Us: We know, but you tell us what it means.
Nyles: No. You tell me what you think it means.
Us: No, no clues, you used the word, you tell us the definition.
Nyles: So you don’t know what it means lol!
And so it will go on. He constantly obfuscates every conversation with behaviour a child psychologist would find concerning. This is clearly not a man to whom maturity paid a visit. As an insight into his morality, when somebody asked the opinion of the admins' god having apparently caused the Christchurch,  earthquake, a tragic event which robbed over 140, and doubtless many more, people of their lives, this was the sum input from Nyles:
“Jesus doesn't even own a sword, killing is the furthest thing on his mind....

Where God wounds, he heals...”
No condemnation of god for murdering innocent people. No thought for the victims or their families. No remorse, no sympathy, no empathy. Nothing. He’s happy to believe his god capable of such atrocities and has not a care in the world of it. No indication that he cares any more for those poor innocent victims than he would a cockroach he stepped on. It is telling that not one of the other admin, nor another creationist for that matter, even saw fit to reply on that thread.
How can anybody, let alone somebody who claims to be Christian, behave in such an utterly amoral, uncaring manner? Is that truly what being a devout Christian means? I'm fully aware that the vast majority of Christians are far more compassionate and caring, I have many Christian friends and you couldn't wish to meet nicer folk – but the problem is, these people would doubtless not be considered ‘true’ Christians because they aren't as fundamental in their beliefs. In the same way they dismiss Catholicism as un-Christian, a bewildering thought process requiring quite the No True Scotsman fallacy.
Back to Nyles Seru. Last night, he overstepped the line between debate and bullying. He decided to visit my personal Facebook wall and leave a post in a discussion between myself and my friends, of which Nyles is most certainly not one!
I told him exactly what I thought of him and demanded he leave immediately. He didn't. He continued to reply mockingly to my insistence that he get the fuck off of my wall. I went to bed around , after tiring of trying to deal with his juvenile delinquent mentality. Upon waking this morning I found that he had again posted. Below is a screenshot of his posts.

A full size version can be found here or by clicking the image above.
Tonight I have been forced to change my privacy settings, which I should not have had to do, and report Nyles for unwanted contact. This was a pathetic attempt at harassment.
Nyles Seru is a disgrace, not only to Christianity but to the human race. A despicable, childish little coward who sits online and bullies people in the name of his religion, hiding behind his plagiarized bronze age mythology, because he cannot hope to reason with them for he lacks the intelligence to enter into an adult debate. If you come across this vile, pernicious little man be careful – he might target you next.
Nyles, if you ever get to read this, doubtless you'll decide to leave some bullshit replies. This will serve only to confirm everything said about you above.
ADDENDUM:
After posting this it came to my attention that this was not in fact the first time Nyles Seru had chosen to come to my personal wall to leave comments. Quite why he thinks this behaviour acceptable, I do not know. One can only put it down to the sheer juvenile arrogance of somebody who believes they can do exactly what they wish.

It's also interesting to note that this incident has since been repeatedly mentioned on "Atheism, Satanism, and Humanism vs. Biblical Christianity" and requests made of the creator, Kim Balogh, as to what she proposed to do about it. She has not seen fit to comment, nor has Nyles.

Is it really any wonder why I really do not like fundamentals when they behave like this?

FURTHER ADDENDUM:
I, and others, made calls on "Atheism, Satanism, and Humanism vs. Biblical Christianity" for Nyles Seru to apologise for his actions and for Kim Balogh, the creator, to make comment. All were ignored. Another member posted, calling us "God haters", comparing us to a plague and as being like "squatters".

I replied asking what that member would think were I to invade their wall and refuse to stop posting, as Nyles had mine? No reply came from that member but finally Nyles saw fit to comment on his actions. There wasn't exactly an apology:

Nyles' reply? "Its an OPEN wall steve .. you ask for it and surely you got it...hahaha"
So he doesn't distinguish between a purpose created debating page, such as he fails to admin, and the personal wall of somebody!? What an absolute idiot lol.
What does this tell us of Nyles Seru? It tells me he is nothing but a despicable little coward for Christ, a jerker for Jesus, sitting behind his computer monitor, making pathetic attempts to harass and bully people because they don't follow his brand of bronze age mythology. If these are the actions of a grown man then he has nothing of value to offer either that Facebook page or humanity in general.
Posted by Opinionated Primate at 04:17