Another Moron for the Messiah

Those familiar with my blog will know I frequent creationist Facebook pages, delighting in the way those who profess to be Christians are anything but Christian in their behaviour. Today I blog about a Christian I have not mentioned previously, on a page I have never before touched upon.
The page in question is The Reliablility of the Bible Put to the Test (it's seemingly an unwritten rule that no creationist page may spell their title correctly). On the whole this is not one of the worst pages, the creator there, Charles Watson, seems a nice enough bloke, aside from his adherence to biblical literalism.

Unfortunately one of his admins is one Robert Charles Webb, who is, to be blunt, an arrogant gobshite of the highest order. The only way I can describe his output is as though he is standing atop an ivory tower, from whence he pisses forth upon those of us who disagree with his opinions. He makes big claims of being a debater at university or college, I forget which on account I tend to turn on my bullshit filter whenever he opines. What he takes for debate actually comes down to copy/pasting blocks of text and then throwing in veiled insults and belittling comments aimed at making the other party look insignificant to his mighty intellect. It fails, it makes him look an arrogant little tosser.
Disagreeing with his opinions is all too easy when, for instance, he continues to insist that Josephus is reliable evidence for Christ. He has cited Josephus' mention of 'the Christ' as contemporaneous to Christ's lifetime. Even were we to set aside that Josephus' mention is far from widely accepted to be genuine, he can hardly be considered to have made a contemporaneous mention when he was not born until after the crucifixion. Therefore Robert Charles Webb clearly does not know the meaning of the word contemporaneous!
Robert will also cite people he states are 'experts' and well respected to support his claims of biblical accuracy, such as archaeologists who claim to have found evidence of Jews in Egypt (which doesn't explain why there's no extra-biblical mention of the ten plagues, the Exodus and so on). Whilst it seems perfectly reasonable for him to cite his experts he will constantly dismiss out of hand any such experts we care to cite in support of, for instance, evolution. Any experts we produce are wrong, end of story. Robert Charles Webb is not a fan of the level playing field, just as no intellectually dishonest player in the game of debate is.

Now to the really nasty side of Robert Charles Webb. He has a habit of quoting an historian who once compared those who doubt the historicity of Jesus with skinhead holocaust deniers. As somebody who does not necessarily doubt Jesus existed, only that he was the person portrayed in the Bible, I find this constant quoting of holocaust denial to be downright offensive and unnecessary. I have repeatedly asked that he stop using such an emotive quote, he continues to do so. Why? Because he's a nasty little scumbag who delights in pushing the buttons of others. As somebody who lives in London, which was bombed nightly for months during the Blitz, I know the Second World War happened, I know the holocaust happened, there are photos, videos, handwritten accounts and so forth, including the buildings where the atrocities took place – and survivors of the camps. For Jesus, no such supporting evidence. All we have is second hand accounts written after his death by people who clearly had a vested interest, hardly impartial independent corroboration. That's not to mention the many contradictory facets of the entire historicity of Jesus' life as written, but I'm straying from the gist of this spleen venting. Back to RCW.
Last night Robert Charles Webb used that quote again. I pulled him up on it and complained to the page creator, Charles Watson. Robert replied, again quoting that damn holocaust denial line – and throwing in an entirely unfounded accusation aimed at me, namely that I had made comments about his pestering women in PM.

My response was to treat like with like. If he could equate, albeit tacitly via a quote he obviously agreed with, Jesus doubters with holocaust deniers then I felt it perfectly reasonable to give my personal opinion on his god. So I did. I was then banned for my temerity of having an opinion!
Clearly, being banned, I couldn't protest my innocence of his accusations regarding his PMing women, so I sent him a private message:
Robert,

For the record, I have NOT ONCE made such an accusation about you PMing anybody! You have therefore made a serious accusation against me that is untrue, yet I have no means to protest.

I therefore ask you remove that offending post immediately and unban me. This treatment is entirely unfair.

Thank you,
Steve
Robert Charles Webb eventually replied with the following:
I think you are correct, I believe that was Meyers and I confused your last name. I will make a public correction. But this isnt why you were banned today...the mocking garbage has to stop. Funny too, I warned two Christians about their personal attacks and they were fine with it. When I warn the non-Christians they whine like children about hypocrisy etc. You will be brought back, you have to request to be added but you are on a short leash. Please no personal insults, mocking etc. We just want a page where the issues can be discussed w/o people being mocked for having their view in the first place. The arguments can be attacked all day long as long as it is within valid argumentation.
So I was banned for mocking garbage? Perhaps Robert Charles Webb should stop posting garbage that is just begging to be mocked? I'm sorry but I do not see why I should give respect to the opinion of somebody who continually accuses others of ignorance, as he is wanton to do at every opportunity.
I also object to being told I wall be “on a short leash” when I'm a 40 year old man and I am as entitled to my opinion of his narcissistic, warmongering, genocidal, infanticide commanding, slavery accepting, rape victim objectifying, incest condoning, sorceress murdering, egotistical sky daddy! I'm fully aware it would be unacceptable to post this on his page, but when he can opine via quotes that we are no better than holocaust deniers my tolerance level for his gobshittery suddenly sharply dips below caring for the niceties of respecting his deluded belief system.
He has also publicly stated twice that I have previously been banned from that Facebook page. Again, this is untrue. I have not, and the first time he made that claim he had to rescind it – but then went on to repeat it yesterday, before confusing me with somebody completely different!
His claim that Christians don't whine when pulled up is also unfounded; On that very page, Charles Watson recently asked a Christian not to refer to evolution as 'evilution', and they whined that it was always the Christians told to keep quiet! Again, intellectual honesty is never the strongest of creationist characteristics.
In closing, Robert Charles Webb is to be placed alongside the likes of Kim Balogh, Nyles Seru, Jason White and many of the other gloriously incompetent creationist admins that feature upon Facebook's fundie pages. He is an ungracious, jumped up little apologetist with one of the biggest chips on his shoulder this side of a Mount Rushmore carving. If he's what God wants for a sunbeam then count me out, I'll go sit in the shade.
Here's some screenshots: 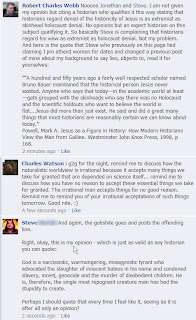 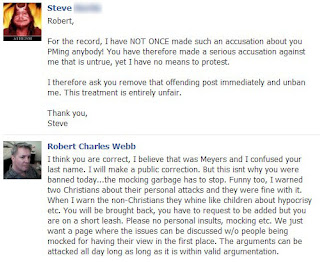 Posted by Opinionated Primate at 19:56