An examination of fine fundie fucktardery on Facbook with an old favourite from this blog, Eric Johnson Shrek, and somebody I don't think I've had the pleasure of venting over before, Daniel “Denial” Wood. This is what it's so often like trying to reason with those of whom it can best be said they are a few gospels short of a testament. The following took place on "Atheism vrs. Fundamental Christianity"


It all started when somebody posted a video from the brilliant “Atheist Experience” featuring Matt Dillahunty. This video centred around the morality of “forgiveness” as taught by Christianity. There ensued a lengthy debate about the contents of the video, during which Daniel Wood gave his opinion, generally in the arrogant “I am right, you are wrong” manner he takes whenever he posts. The debate continued and then Daniel posted this.

So just because Daniel has opined the debate is over? I do not think so, so I responded with 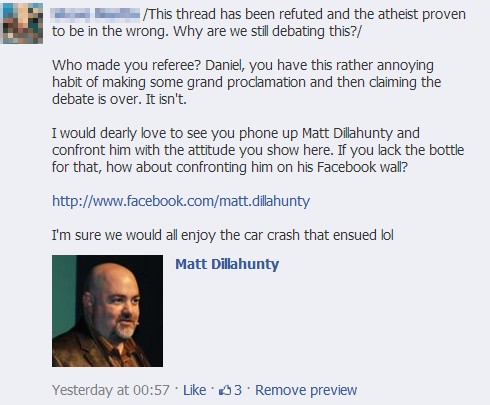 As you can see, I made no mention of Daniel's opinion, it wasn't particularly relevant given others were still debating. I also said I would love to see Daniel confront Matt Dillahunty with his views.

Daniel shot back in his customary arrogant way with the following.

Now you've read my post, where have I shown an inability to read? This is typical of Daniel's debating style, he constantly accuses the opposition of illiteracy, lack of education, lack of comprehension skills and so forth. Ironically whilst demonstrating exactly those traits himself. It's because I have suffered his antagonisms for months that I no longer pussyfoot around him, as shown in my response. 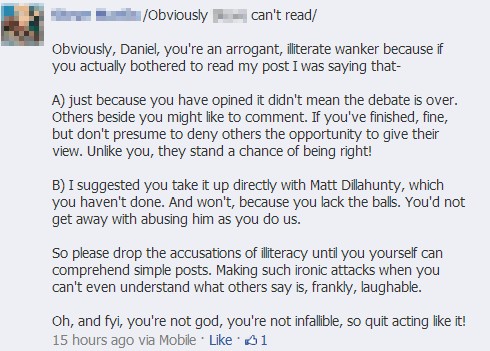 At this point our old friend Eric Johnson Shrek, the admin of that page, stepped in with the following warning for me.

Hang on, Daniel is an 'elite' member, what exactly is one of those on a Facebook page!? He's not an admin, he's just another member, but suddenly he's 'elite'? I had to respond to that one.

Instead of dealing with Daniel's repeated abuses and insinuations, Eric Johnson Shrek shows his true colours by replying thus.

So what Eric is saying is that Daniel can be as offensive as he likes, if we don't like it we can leave? Yet if we are remotely offensive to him we get warned. This is impartiality from an admin?

Before I could respond, Daniel decided to let fly a stream of consciousness as follows, attacking Matt Dillahunty's abilities to debate and generally acting like the jumped up little twunt that he is. 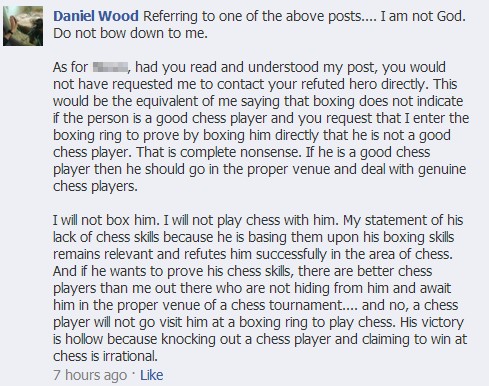 So I respond in a manner befitting talking to the proverbial pigeon who craps on the chessboard. Only to again be accused of an inability to understand English.

The final part of the to-and-fro is as follows, where I again attempted to explain my point.

It may be that you disagree with the manner in which I speak to Daniel on Facebook but let me make something clear, he has accused people with several degrees from prestigious universities of being uneducated, because they don't agree with him. He repeatedly accuses people of comprehension difficulties, of needing to get an education and other abuse. He is, in short, a complete and absolute imbecile.

A further example of this cretinous little gimp for god's behaviour followed his posting of a series of videos. These videos, which weren't particularly short, were watched by a fair few of us as Daniel claimed they demonstrated that science makes appeals to the paranormal. They don't.

For weeks now, several of us have repeatedly asked that Daniel supply a timestamp in one of the videos where the professor presenting them confirms his assertion. He won't. Instead he insults us, saying it is like feeding children or teaching children who are unwilling to learn, both of which he refuses to do. He attacks our abilities to understand even the basics, of an inability to read and so forth and accuses us of his favourite word 'sophistry'. All the while we merely ask him to state in which video and at roughly what time in that video the presenter makes mention of science making appeals to the paranormal. Not once has he attempted to do so, why? Surely the rational response would be to offer than information!

Of course Eric Johnson Shrek does nothing to quell his abuses and accusations, allowing the atheist to be attacked because, frankly, it suits him. Eric makes little attempt to hide his contempt for freethinkers and nor does Daniel.

Well, Eric, you can suggest I leave your page if I'm offended. I'm not. I'm just disgusted with a "Christian" such as you allowing other claimed Christians to behave so abysmally. Eric, you are the keeper of that zoo of windowlickers and so it is incumbent upon you to step in when the exhibits, such as Daniel, start throwing their shit around. Instead you act when the spectators object to their faecal flinging, and only then to warn those who are the target!

As I get warned when taking Daniel to task on Facebook I shall instead give my opinion here. Daniel Wood is one of the most objectionably nasty, arrogant, insolent, Dunning Kruger exemplifying little c**ts I and many other have had the misfortune of encountering. He manages to encapsulate a degree of ignorance and arrogance that borders on Kim Balogh levels, and that really is saying something.

He would disagree, obviously, but then that's Daniel for you!
Posted by Opinionated Primate at 03:28