Let me make it perfectly clear, whilst I love Facebook I currently also despise Facebook because of the appalling way in which they allow people to abuse the report function to target both users and pages they dislike.

As I write this I am sitting out a 24 hour ban. For what was I banned? Your guess is as good as mine because their warning message failed to tell me, as you can see from the image below. 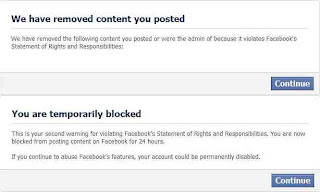 The temporary ban, to become permanent should I continue to break their rules, comes after a few other warnings. Were these warnings justified though? I personally do not believe they were.

The first came after I quoted Richard Dawkins' opinion of god. This is a fairly well known quote and it is quite obvious the only reason it was reported was that the Christians on that page didn't like it. Tough shit, this is a page where I am told my soul deserves to be tortured for eternity for not believing in god or worshipping him. So they consider it fine to gloat on the never ending punishment of a good man but woe betide anybody who considers that scenario, or the god who dictates it, to be objectionable.

Another warning followed my posting on the page Fundies Say The Darnedest Things of this post from Reliablility(sic) of the Bible put to the Test. Read it for yourself. 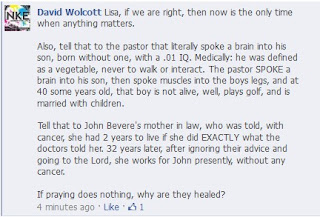 It's insane, for crying out loud the man is claiming a pastor prayed a brain into a baby – a baby that somehow had a measurable IQ! He then prayed muscles into his legs! Clearly David Wolcott, along with others from that page (of which you can read more on this blog) took exception to their lunacy being mentioned elsewhere, so decided to report it. David had posted this on an open page that anybody can read, even non-members, so it was in the public domain.

Do not forget that this page, Reliablility of the Bible …, is a page on which atheists are often treated with ridicule and derision. In fact, recently a member was told they should not opine on the subject of spirituality because as an atheist they are, and I quote, “the walking dead”. Ironically the member who said this feels entitled to denounce evolution as nonsense, spouting the most ridiculous claims, because she is a Young Earth Creationist who believes the Bible to be infallible. The hypocrisy is therefore palpable.

Other pages, including one from which I was banned for protesting such bile, contain rampant homophobic hatred and bigotry. I'm heterosexual but was told by an admin that I am clearly gay because I take exception to their vile crap. Yet Facebook does nothing about such pages.

This latest ban is, as we've seen, based on who knows what, Facebook have failed to tell me. I've not posted anything particularly contentious in the last few days. The problem is that there appears to be no right of appeal, which has serious consequences because it means the report function is open to abuse by what can only be described as cyberbullies.

We know of at least one page which exists solely for Christians to report atheist pages so that they may mass report those pages for deletion. Similarly it only takes a sufficient size clique of narrow minded morons to decide to target an individual to have them warned repeatedly and eventually banned. It's clear that Facebook does not monitor these reports, the sheer number of members would doubtless preclude it, so it is being handled by an automated system – one which has no way of knowing whether the posts reported are in breach of their T&Cs or whether the post merely belongs to somebody these people have taken a dislike to.

Checking Facebook's help and T&C pages will leave you lost in a contradictory mire of confusion, certainly there's little of help there unless one wishes to block every single person of an opposing opinion, thereby negating the point of debating pages. On the one hand they say you must not post anything that is religiously offensive, yet on the other they say that pages must not breach a member's rights under law – those rights actually, be it under the US 1st Amendment or the European Court of Human Rights, include the right to blaspheme! What one person sees as their right, to opine on the atrocities claimed of gods and committed in their name, is seen as religiously abusive to others, so where's the dividing line and how exactly is Facebook implementing it?

Facebook needs to either tighten up the reporting procedure to weed out abuses of it, or allow those like me who are given warnings a right to appeal. Unless they do so I am sorry to say that Facebook is facilitating the actions of online bigots and bullies.
Posted by Opinionated Primate at 04:41