So, Shrek, funny film, right? Yup, I agree. It is, as are the sequals. I love Donkey, he's hilarious. Anyway, as much as I'd like to discuss the merits of Dreamworks' masterpiece of animation, I'm here to talk of another Shrek, Eric Johnson Shrek to be exact.


You're probably wondering who Eric Johnson Shrek is. How can I put this succinctly? Hmmm, he's a imbecilic wanker of the highest order. That doesn't actually do him justice but it's a start. Eric is a Christian fundamentalist on Facebook and runs a page called “Atheism vrs. Fundamental Christianity”. On this page, no let's call it what it is. On this cesspit of fuckwittery he takes delight in being offensive to atheism and rejects any and all attempts to educate him on the subject.

Another Christian member joined today. She'd been banned from another page after posting a graphic photo, probably faked, of an aborted fetus – which broke that page's rules. Eric decided to bad mouth the admin of that other page as an atheist. They're not, they're Christian! He compounded this error by labelling atheists as cowards.

When I picked up Eric on his little mistake, pointing out that the admin was Christian and atheists are not cowards, we're not the ones worshipping a sky tyrant out of fear, he decided to attack me too. So very Christian.

He didn't go straight for the insult, he first said

“Mr. (DawkinsDog), I wont ban you or try to baptist you.”

“non-believer = ? ..who are you all? What type? no fear of wrong doing? no rules and regulation?”.

Clearly he thinks that atheists have no morals, no knowledge of right from wrong. So, I put him right with the following.

Atheists simply do not believe in gods. We're not lawless, we're not anarchists.

I believe in rules, I don't break the laws of my country, I care for others, I help charities - and all because I want to, not because I have to because god says so!

If I do something wrong I expect to pay for it now, here on earth, to be held accountable to my fellow man - not defer punishment until I'm dead, by which time I can avoid punishment completely by loving a blood sacrifice! THAT is immoral. THAT is wrong.”

Another of his posts, which I'll spare you the bulk of because it's his usual blah-de-blah of how he'll continue to fight for Jesus, contained the following line.

Great, just what this world needs, another Crusades or persecution of non-believers. My response was as follows.

“Yeah, because that worked so well for Christianity for hundreds of years. Gonna start torturing and murdering us again, too? Just imagine the fun you'll have, jackbooting your way into the lives of atheists, bible in one hand, internment camp orders in the other.

How would you like us to salute you? I favour the raising of a middle finger.”

The conversation, with others participating, then turned to why Eric Johnson Shrek had himself been banned from that other page, the one from which the new member had been removed. He'd had a disagreement with another member, a young woman, and had taken it upon himself to contact through Facebook her friends and family to complain about her. Yes, you read that right. He stalked and harassed a woman online. Again, very Christian.

He tried to excuse this behaviour by claiming that it is perfectly normal where he is from. Oh, well that makes it all okay then, right? Bollocks it does. He harassed and invaded the private life of a woman online! My response was as follows.

“If it's normal to complain to elders, can I have a list of your family and friends, Eric? I'd quite like to let them know how you're behaving on here, abusing people etc.

You'd probably not like that, right? Just as well I'd not do it, because I have more respect for you - even though you don't deserve it.”

Note how I said I wouldn't do it, I'd have more respect? It's true, I would never do what he did, for all I'm a nasty, immoral atheist. So, how did this cretinous little insult to humanity respond? With this.

“That's why you are loose footed still, no one control you, what you do in open forum. Write what you wish? Post as you wish? No morals in your thinking. I always reject your posting as sub-standard. Mr. (DawkinsDog).”

That was the final straw, he'd used the no morals and sub-standard thinking line against me before when telling me he always rejects my posts. This time I wasn't going to sit there and allow him to get away with it. I responded with this.

I'm without morals, without control? Let me tell you something.

Yeah, I'm really immoral with no control, aren't i!?

Have you read all that, Eric? HOW DARE you claim I am without morals, without control and have sub-standard thinking. You sanctimonious, judgmental, ignorant little man! I am sick of your attacks.

FINAL WARNING. Don't you ever speak to me that way again, Eric. You know nothing about me, you have no right to judge me. You sit there like a coward behind your monitor making unfounded accusations for all to see. No more. This ends now.

Apologize, Eric. You owe me that much”

Every word in there is true. I've never smoked, never taken drugs, never been drunk etc. Could he claim the same? I very much doubt it, yet he's sitting there sanctimoniously accusing me of being immoral and without control!? Fuck that for a game of soldiers!

Did Eric give me an apology? No, of course not. That would mean he had to admit he was wrong about me. It would probably cause a mental breakdown if he had to accept that atheists can be just as good, just as moral, just as responsible as theists. Arguably we're more so, we're not doing it because we're told god wants us to – we're good because we want to be.

So, Eric Johnson Shrek. I said that was your final warning and I asked for an apology. You didn't offer one, so here is your reward, a blog update on which people can read what a despicable, pernicious, judgemental, sanctimonious, deluded fucking c**t you truly are. I would say may your god have mercy on you but unfortunately atheists don't get to threaten others with eternal hellfire, like Christians so often do to us.

You'll probably decide to ban me from your page when you read this, even though you say nobody will be banned. I honestly don't care. Ban me, don't ban me. To paraphrase Winston Churchill, “Tomorrow morning I shall be free of your idiocy. You will still be a c**t!”

I'll attach a few screenshots below, if only so you can see I'm not imagining this moron's existence! 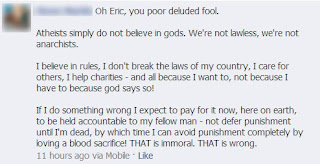 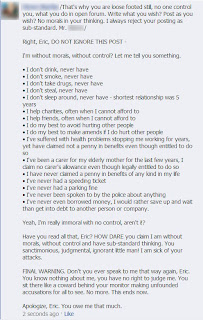 Posted by Opinionated Primate at 02:42