We've seen mention of Nyles Seru before, he's the ignorant little arseburp admin from Facebook's Atheism, Satanism and Humanism vs Biblical Christianity. I've told of how he does nothing but gloat and goad, never attempting to enter debates and expressing no desire to. He is, at the end of the day, a complete waste of oxygen. Tonight he managed to lower himself to new depths.
For those who did not know, today 13th April, was Christopher Hitchens' birthday. Christopher has been suffering with cancer for some time and the prognosis is not good.
Tonight, Nyles Seru chose to post the following on their disgusting cesspit of a Facebook page.
Antony Flew was the most famous sophisticated atheist in the academic world, He confessed that Christ is REALLY Lord afterall....as it is written "EVERY TONGUE WILL CONFESS THAT JESUS IS LORD" Christopher Hitchens is heading that way too...Yeeeeeeeeeees!
After I and another member challenged his post, Nyles responded with this.
Antony Flew once graced the stage with his proud stance of "there is no God" belief..."every knee shall bow and every tongue confess that Jesus is Lord!...Hitchen's NEXT!
Again, I and another member challenged him. I asked that he not be so disrespectful to the name of a man who is dying. Did Nyles pay any attention? Of course not, this was his offering.
Long before Hitchens hit the spotlight...Antony Flew had it all, this famous an sophisticated atheist ultimately admitted that Jesus is Lord....a real slap in the face to his atheist counterparts!...Hitchens is NEXT
After another member confronted him, Nyles still didn't stop, coming back with
Hitchens is NEXT...God surely knows how to humble the proud
Antony Flew may have converted towards the end of his life. That is a personal decision he and he alone could make. It sickens me to see somebody like Nyles Seru using that man's death as some sort of gloating point but when he also brings into it the name of a great orator and thinker such as Mr Hitchens, a man who knows he is dying and is facing it with such supreme courage, that is beyond contemptable.
At the time of writing, Nyles has not responded to that thread again. Doubtless he will as he delights in offending and mocking atheists, seeing it as a game. This game, Nyles, you went too far.
Should you wish to visit that thread, or indeed their depraved little page of delusion, the link is here:
http://www.facebook.com/permalink.php?story_fbid=168492869870798&id=100000090375965
I'll end with a screenshot of the thread, should Nyles see fit to remove it in an attack of conscience. I doubt he will, he is absolute filth. 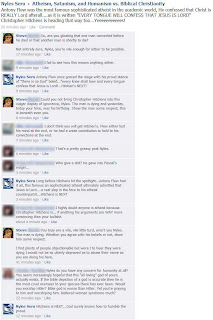 Since writing this blog update, I've made a little YouTube video.
Posted by Opinionated Primate at 02:55