Those familiar with my blog will have heard of a Facebook page “The Reliability of the Bible put to the Test”, as I described here

A few months ago saw several of us sanity mongers banned from that cesspit of stupidity, we suddenly found ourselves unable to access it and attempts to find out why were unsuccessful. I personally PM'ed the creator, Charles Watson, only to be told it was probably because I'd broken “rule 10”.

The problem is that “rule 10” states that it is a banning offence to post any material from their page on another called “Fundies Say The Darnedest Things” (FSTDT). And I hadn't done so after “rule 10” was introduced, my post there had been before it's introduction so they were making up excuses to ban people and then retrospectively doing so! Even then Charles couldn't tell me if that is what I was banned for, I doubt he made any attempt to find out. I'd certainly not been offensive or abusive on his page so they had no other just cause – but when do creationist cretins need just cause? Other members had also been banned for posting on FSTDT before “rule 10” was brought in.

Anyway, a strange turn of events happened the other day. Many of those of us whom where banned were invited back, but not to the main page, oh no – to “The Reliability of the Bible put to the Test – Probation”. Yes, that's right, we were being put on probation!

Out of curiosity I joined, as did others.

That page is, unsurprisingly, a disgrace. The admin refuse to tell any of us what we were banned for yet are seeing fit to put us on trial to see if we're trustworthy enough to be allowed back with the other kiddies in the playground. We are grown fucking adults for crying out loud, do they seriously imagine we are going to put up with such treatment?

If we post asking why we were banned we are told it's irrelevant, we're there to prove we can hold a debate without being abusive and without mocking their religion. Erm, hang on. We're ON TRIAL but they can't/won't tell us why we were ever banned and refuse to be held accountable! Why should be prove anything to anybody if they can't account for their own actions?

Their reasoning; the page is private and, as such, they don't even need a reason to remove people and certainly don't have to justify themselves when they do. Really? This is Christians. Doesn't that tell you everything you need to know! These are not the actions of respectable admin who are interested in impartiality, these are the actions of a dictatorship.

Now we come to the real killer of hypocrisy.

The creator, Charles Watson, sent me a private message to say that he would be willing to allow me back. Great! Ah, but it's not that simple. He's since discussed my case with the other admin and they have agreed that I shouldn't be allowed back unless I make a public apology to one of their team, Robert Charles Webb (who I've mentioned on my blog before). Why do I owe this vile, repulsive, ego-maniacal, streak of self-righteous arse gas an apology? For a remark, clearly a joke, made on another page, FSTDT!

Somebody had posted a picture of Robert Charles Webb with the word “C**T” underneath and in the subsequent thread somebody else had commented he looked like a paedophile. I responded to say that I didn't think he was a paedophile and that I credited children with better taste anyway.

Let me make it quite clear here and now – I do not, nor ever would, say that Robert Charles Webb is a paedophile. He is an absolute c**t though, as he constantly demonstrates every time he goes off into one of his “you're blustering in ignorance” tirades that make War & Peace look like a pamphlet. The guy's a consummate gobshite, which is why he is so widely despised on Facebook amongst those of us he has 'debated'. He uses any opportunity to reference some ignorant wanker of an historian whom apparently said those who deny the historicity of Christ are akin to holocaust deniers. So he's happy to imply, even indirectly, that I am no better than a holocaust denier but I'm not allowed to make a JOKE at his expense? He can get stuffed, he's not making a joke when he makes his accusations.

Robert Charles Webb can't even grasp a simple principle. On another page on which I am a member he recently joined. I spent an absolute age trying to explain to him something a child of 5 would understand and he continuously missed the point and twisted what I was saying, obviously throwing in insults and accusations that I was blustering in ignorance. Well, BobbyW, I'm not the one who couldn't understand the point of my post whilst everybody else knew exactly what I was saying. Go figure!

Where does the hypocrisy of this new 'probation' page come in though? Well, consider this post from another of their admin, Cliff Peterson


“Guys, please understand and accept the reality; for as long as you look back and lament you will not be readmitted. This page is about moving forward, not trying to place blame or right any kind of wrong real or imagined.”

Except when it applies to me, where I am being expected to apologise to Robert Charles Webb for something that didn't even happen on their page in the first place! How the royal fuck does that work?

Ah, but it gets better. They demand that those being readmitted do not criticise, mock or deride Christianity and god, doing so shows you're not willing to listen or learn. No it doesn't. It means you're talking bullshit and deserve mockery if you keep talking bullshit when given evidence you're talking bullshit. Christianity, indeed any religion, should never be seen as above criticism. If you're claiming that an invisible man sits upstairs and watches your every move, that evolution is a lie and the Earth is only 6000 years old, you deserve nothing but derision because you're a fucking imbecile! When those same beliefs are used to condemn others for homosexuality or to teach children they are born of sin and must spend their lives repenting for the actions of some woman who was lied to by a talking serpent, damn right you should be expected to back up your bullshit unless you want ridiculing. You're spreading hatred and poison across this world and hurting people.

Does this demand for respect run both ways? Does it hell. Take this example, from the “Probation” page, where Cliff treats us to his thoughts on evolutionary science.

“I have no respect for any of the stupidest ideas the we are descendants of some animal. There is Z-E-R-O evidence of it. The only thing you idiots go by is your stupid interpretation of the facts. You're even too stupid to realize that you have no foundation for you idiotic belief system.

You claim, all day long, that it is all based on science. I have news for you; IT AIN'T!!! That's not science. It's nothing more than running away from God and you're even too stupid to realize that. You're also too thick headed to admit that all of your conclusions are based on your idiotic fantasy wishes having no foundation.

Everything you believe has no foundation because it is 100% based on assumptions that you're even too stupid to admit. It's like having 4 pieces of a 10,000 piece puzzle and you think you have the world by the balls. I have news for you boy - - YOU DON'T.

But even through all of this, you don't see me crybabying because I can't get my way. STOP IT! Knock it off and take responsibility for you life.” 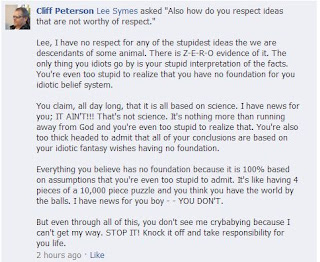 “Christian scientists, quite frankly, are far more qualified than any secular scientist. They have a solid foundation from which to begin their research. All your people have is wishes.”

Read those again and remember that atheists are forced to show their religion respect. Does it look as though Cliff Peterson shows any respect whatsoever for our beliefs? Our beliefs would be the wrong word anyway because what we believe can be backed up with evidence!

He doesn't even stop there. He goes on with

“And I don't care how many supposed scientists back up your beliefs. They're as wrong as you are. Telling me that all creation sources are imaginary and foaming at the mouth insane religious sources shows your intent.

I can't help that you don't have brains enough to see that the evidence is NEVER going to lead anywhere except where the viewer predetermines. You think that the evidence "points" to old earth. It doesn't. Evidence doesn't point to anything; it has to be intepreted. And just because you choose to interpret it as old doesn't mean your'e right.”

I wasn't part of this conversation, thankfully. The poor sod who was replied, explaining that evolution and the age of the universe aren't the preserve of secular science, many Christian scientists also accept it, saying

“And where did I say all religious sources were insane? Kenith Miller and Fancis Colins are Christains that accept the age of the each at 13.74 billion years and evolutionary biology.”

For reader who don't know. Kenneth Miller is an evolutionary biologist and a Christian. Francis Collins is the head of the Human Genome Project, and also a Christian. Did any of this impress Cliff Robertson? Of course not, he dismissed them with

When I pulled Cliff up on this little outburst, the lack of respect shown whilst demanding we show respect, and stated that had he posted such a comment on the main page it would warrant at best a warning if not a ban, he replied with

So there you have it. A page where we are on “probation” and having to prove ourselves capable of sensible, respectable debate without resorting to mockery and insults where the very admin that run it do exactly that themselves.

As I hope, though not pray, that Charles Watson, Robert Charles Webb, Cliff Robertson or any of the other cretinous god botherers that run that page will do a Google and find this page, I have this to say.


You are the very reason I am not just an atheist, I am anti-theist and proud of it. If your little Jew Zombie turned up again I would cheerful nail that bastard (correct term, god wasn't married to Mary) upside down to the nearest lump of wood and let the dogs piss in his face for the evils he has brought upon this world by spawning such hate filled, ignorant, intolerant, bigoted scum as you and your kind. You are a blight on humanity and a danger to this planet.

You are all nothing but hypocrites. You demand we respect the delusions of a bronze age myth that should have died out when Nero was burning your brethren to keep his garden lit. We're supposed to tug our forelock and allow you to mock, deride and insult us and the work of millions of scientists who know rather more than you and your intellectually dishonest Ken Ham, Kent Hovind, William Lane Craig style batshit crazy liars, criminals and charlatans.

Posted by Opinionated Primate at 21:39