I’ve not posted an update here in a while, as I’ve had more important things to deal with in my personal life, but I feel it’s time I dusted it off, if only to warn other potential customers to avoid Currys PC World. Here’s why.

Let me here take a moment to explain why £399 is a lot of money to me, and why I feel so aggrieved by the attitude of Currys PC World. For over ten years I was an unpaid carer to my late mother, who passed last December. Since then I have been unable to work as I’ve been dealing with my own health issues, which have included a stay in hospital, numerous tests, and still now being on medication for what was dangerously high blood pressure. Money is not, as you will appreciate, something I can fritter away, this was a considered purchase.

You can therefore imagine my anger when the laptop arrived and was not of the specification Currys PC World’s website stated: it lacked both the Windows Hello function and fingerprint scanner.

I contacted their Knowledge Team on Twitter and was offered a refund, on which I’ll comment later. They also apologised, thanked me for the information, and assured me the website team would update the specifications. They didn’t. I informed them of this problem on the 14th November yet as I write this on 26th November their website still displays the incorrect specifications – meaning potentially thousands of customers have since been knowingly misled into a purchase. Indeed on one visit to check I saw the website stated that over 5300 people had viewed the laptop in the previous 24 hours, all of whom who subsequently chose to buy had done so based on false pretences.

Did I accept a refund? No. Because it wasn’t viable. I couldn’t source a laptop with equivalent quality screen, CPU, memory and storage but with the missing features elsewhere for the same price because the one I’d bought had been on offer. I couldn’t purchase one with the missing functions from PC World without paying out substantially more, simply to regain what I had already thought I was purchasing. Catch 22, no laptop or a laptop missing features – nice choice, Currys PC World.

So I wrote a letter of complaint to Alex Baldock, their company CEO. This letter was signed for at their Head Office on 18th November, and went completely ignored. This means that not only were their Twitter support made aware of their error on the 14th, their Head Office were also told – so they have absolutely no excuse to still be knowingly mis-selling the product on the 26th

Tonight I have decided to have one last ditched attempt at getting Currys PC World to right this situation satisfactorily by emailing their Customer Services Manager. I don’t hold much hope that they will give any more thought to their customers’ rights under UK consumer law than the rest of them at the company, but if I hear anything back I will update this blog to reflect the outcome.

I’ve already lodged a complaint with the Advertising Standards Authority, who also regulate online advertising, and BBC’s Watchdog, because what’s to lose, right? Plus there’s the reviews on Trust Pilot and such sites, because I want other potential customers to know what they’re getting into with Currys PC World.

Below are screenshots taken tonight, 26th November, showing they have still not updated their website. This is legally irresponsible of them and completely unacceptable of a company their size. 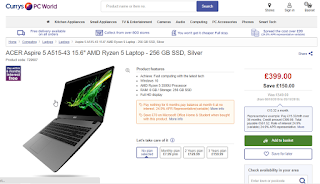 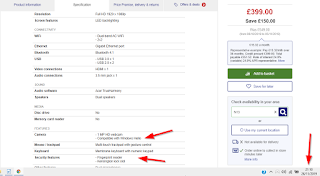 Posted by Opinionated Primate at 22:04