Another blog update featuring one of the most repulsive Christian fundamentalists I have had the misfortune to encounter on Facebook. I speak of course of Kim Balogh. If you are familiar with my blog you will already be aware of Kim, she is the creator/admin of “Atheism, Satanism and Humanism Vs Biblical Christianity”, a Facebook page so bereft of intellectual honesty from the creationist contingent that one often sits and stares at the screen in disbelief.

This particular update is about the laughably intolerant and dishonest way in which Kim Balogh runs that page. Again. You'll recall from previous updates how she defends her fellow admin, Nyles Seru, when he harasses and intimidates members both on their personal walls and via private messages. Here is another example of her incompetence and arrogance running amock.
Kim likes rules on her page. Here they are:
This is a group comparing Atheism, Satanism and Humanism (with similar belief systems) to Christianity. There may be disagreements but please be nice about
sharing your view!

Also, If after a warning the rules are still disregarded I will unfortunately have to ban
Also this is a group to discuss the bible with atheists and not a group for Christians to argue doctrine. There are other groups for that !

Note that last line. “Also..NO CULTS.” Well, Christianity is, technically, a cult by one dictionary definition, “A system of religious beliefs and rituals” (WordWeb, Princeton University). Even excluding Christianity, you are left with Satanism in the title, which would surely qualify as a cult? Does this mean Kim would exclude Satanists from the debate? It's an interesting question that so far hasn't been answered as no such person has, to my knowledge, joined.
Anyway, on with the example of Kim's intransigent arrogance and ignorance.
A member joined recently whose name I'll not give here. Suffice to say this member put my meagre knowledge of scripture and biblical history to shame. They were a tour-de-force and a delight to watch locking horns with Kim in debates. That didn't go down well with Kim, who was clearly fed up with having her posterior handed to her on a plate, and so she pulled the following stroke by posting:

Can you believe the nerve of the woman, to invite somebody to another page where she and other admins will 'minister' to them? Who the hell does she think she is! The problem is, the member in question is not a universalist anyway. It would seem that Kim can misinterpret what somebody says, make a decision and act upon it without any justification and without issuing any warning. This is hardly the actions of a competent admin, let alone those of a supposed Christian! Having said that, it does seem typical of many Christian admin on Facebook.
It was pointed out to Kim that this member was not a universalist, and it was ignored:
This group is for atheists, humanists, and Satanists. I have another group for cults and I sent her over there.

Universilism is not biblical doctrine.

Again it was pointed out to Kim that the member was not a universalist, even that they had described themselves as a “humanist with Christian leanings”. Kim continued to be an arrogant, petty little tyrant, switching, as she so often does, to quoting scripture instead of actually having to justify her own actions:
Sorry, no cults allowed, that is stated in the rules. Universalism believes all religions are from God and every one will be saved. Scriptures do not teach that.

Then they asked him, “What must we do to do the works God requires?”Jesus answered, “The work of God is this: to believe in the one he has sent.” John 6:28, 29

" Whoever believes in the Son has eternal life, but whoever rejects the Son will not see life, for God's wrath remains on him."John 6;47

Jesus answered, "I am the way and the truth and the life. No one comes to the Father except through me." John 14:6

Her motives to be on this group was to propagate universalistic doctrines (not preach salvation to the atheist) which is not biblically based. I sent her to another group so that she can hear the gospel. 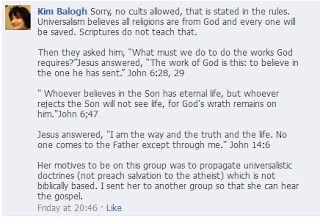 Further protests were made, all ignored and dismissed out of hand. Her response being:
She did not come from my friends list as I screen my friends very carefully plus I looked, she was not from my profile but another admin who obviously does not screen.

What has the member being on Kim's friend list have to do with anything? I'm not on her friend list, nor are a great many of the non-Christians on that page, for obvious reasons – she's a prejudiced bigot who wouldn't allow them to be! So how does one get to be a member on the page, or is it intended to be a Christians only cesspit of lies and self delusion that atheists and rational people happen to have gained access to? Her entire argument in this last post was nonsensical.

Continuing to highlight her rampant bigotry and ignorance, she went on:

Some Christians may not be particular who they fellow ship with but I do not fellowship with cults, at least knowingly. If I find them out then I delete them.It is one thing to be ignorant of God but quite another to lie in his name.

Who said anything about fellowship? This member was merely on the same Facebook page and to say she doesn't 'fellowship' with cults is ridiculous, she's a member of one of the biggest cults on the planet! Her prejudice and intolerance is exhibited in her claim to delete any she finds. The icing on the cake is her line "It is one thing to be ignorant of God but quite another to lie in his name" when that is exactly what she was repeatedly guilty of throughout that thread.

Not content with having already confirmed her own stupidity, she compounded it:

So not believing in the 'fundamental basis doctrines of the bible' = CULT! Does it?
Here's an interesting problem for Kim. Her co-admin, Steven Bailey, claims vehemently that the universe is 13.75 BILLION years old, unlike the Young Earth Creationists that he works alongside, yet he also believes that the Earth is actually older than the universe. This means he must be in a very small minority of Christians, which makes his a cult view. Yet he wasn't and isn't banned. Why not? It's quite simple. He's couldn't argue his way out of a paper bag if you gave him a machete and instructions on how to get out of a paper bag using a machete. And a torch so he could read the instructions whilst trapped in the paper bag.

The answer is much, much simpler; Kim Balogh had to get rid of this member, not because they were part of a 'cult', which they are demonstrably not, but because they were wiping the floor with her at every single turn. Kim was being humiliated by the arguments put to her and she does not like being made to look stupid (which is a shame as she is just so good at it).
Other members continued to protest on this member's behalf and Kim continued to ignore them, instead quoting scripture after scripture, which I'll spare you as it says nothing of any value.

What have we learned here? I'll tell you.
Kim Balogh is, as has also been demonstrated on previous entries, a disgrace. She is a bigoted, judgemental, arrogant, intransigent and completely incompetent admin and a despicable example of humanity. She rules that page with such a disregard for fair-play that she will make up the rules to suit the actions of herself and her co-admin. She will ban people who have done nothing wrong, other than beat her hands down in a debate. She will LIE about that person, claiming them to be things they are not. She cannot dispute this; she continued to call the member in question a universalist long after it had been repeatedly pointed out that they were not. She hides behind scripture because she is too much an intellectual coward to give a personal, reasoned opinion, instead letting the Bible be her weapon of choice. Her arrogance in presuming to 'minister' to a 'cult' member speaks of a disturbed and mentally ill person, one that has relinquished reality in favour of a narrow minded, scripture centred, obsessive delusion. Kim Balogh claims to be a paralegal in Canada. One can only hope she doesn't take her prejudices and bigotry to work with her and is more competent at her job than she is at running a Facebook page!
She is, in short, a despicable mooncalf of a dictatorial harridan who deserves every ounce of scorn and mockery that is poured upon her.
This is Kim Balogh. Look upon the face of bigotry, arrogance and ignorance. She is a shining example of why religion is an evil force on this planet.

Kim, if you ever read this blog I hope it shames you into realizing what a despicable person religion has made you. I doubt it will as I truly doubt you have any concept of shame, it has been replaced by self-righteous bile, as this sorry debacle proves.
Posted by Opinionated Primate at 03:38